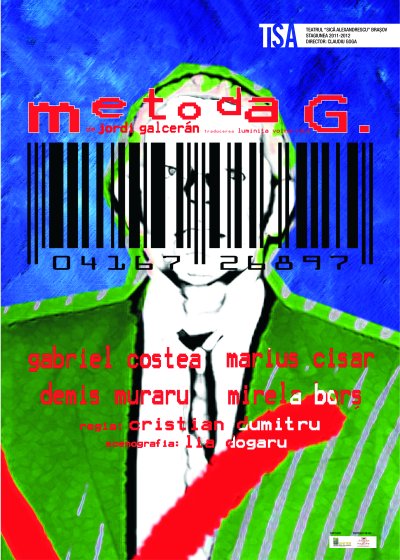 The Grönholm method was  set up at the Catalan National Theater in Barcelona in May 2003 and has, since its debut, been an unprecedented success. In 2004, it premiered in Madrid and, during a season, it was played successfully in both cities. This play has been nominated for many awards in Spain, including: The Max Prize for best work, the Ercilla Award for Best Dramatic Creation and the Maya Award for the theatrical event that was most acclaimed. It was played, among other countries, in Mexico, Argentina and Venezuela. Shows took place in Lisbon and other European countries. Recently, Argentine director Marcelo Piñeyro has released a cinematic adaptation (The Method).
“Looking at everything wrote in my life, meaning not many pieces, one thing crosses my mind: the game. In all my works, the game is essential. The characters play with each other, the piece is played with and for the audience, the intrigue abounds in playful concepts … And I think that’s how it should be, because I myself create my own piece of work as a game.
I think that, from this point of view, the game has all the elements that make a story interesting, and maybe that’s why my characters are always playing. And maybe because of this,I relate my work to a game. I’m fixing some rules, looking for opponents, setting limits, challenging and starting to play. And I play trying to use common sense, but at the same time leaving room for the unexpected surprise. “(Jordi Galcerán)
All the cynicism, but this time the kind that is “professional”, corporatist, subsumed to the prosperity of the company, beyond the feelings is the subject of Method G by Jordi Galceran, staged by Cristian Dumitru at the “Sică Alexandrescu” Theater in Brasov. The play is also known as a romanian version by Theodor Cristian Popescu, so a comparison is hard to avoid. But if Popescu went on displaying scare, especially in the case of the character who competes for a job in a large company, willing to go over everything to get the job, “bewitched” by the three psychologists-evaluators of the company, in a game of cat and mouse, for Cristian Dumitru the nuances gain more importance. “When you enter the company you are like a clown in a circus arena, the funny guy or the villain,” says one of the heroes at one point, and the character interactions revolve around that idea. In the stage installation in Brasov there is a kind of insidious-playful “softeness” in the battle for life and death unfolded in the interview room. The “acting” of psychologists, who turn to personal traumas, frustrations, ambitions, “wounds” of those who are evaluated, are finally unmasked by the “rejected” candidate, which proves to be “more squeamish” than corporatists. In the utilitarian setting designed by Lia Dogaru, the actors Gabriel Costea, Marius Cisar, Mirela Bors and Demis Muraru very accurately outlined the typologies of the characters, despite some hesitations or conjunctural shortcomings. In this version played in Braşov, Method G is a representation of the perfidiousness of the system,in which wickedness is still mined by the faded aura of human consciousness. “