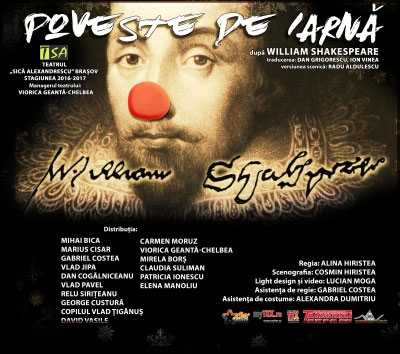 Appointed in the genre of comedy drama, Shakeaspeare’s work is also a drama about love and jealousy, power and hope. Keeping man and the divine in a refined balance, a winter s tail combines the exotic with the magic with the realistic psychology of tragedy.
“Hermione is righteous. Polixenes innocent. Camillo is a devoted subject, Leontes is a jealous tyrant, and the king will remain without the heir if lost is not found. “(W. Shakespeare)

About the director:
Alina Hiristea has so far directed over fifty professional theater performances, including Amedeu, or how to get rid of Eugene Ionesco, Miss Julie of August Strindberg, Doors Closed by Jean-Paul Sartre, Misunderstanding by Albert Camus, Ivona, the Princess of Burgundy by Witold Gombrowicz, Servant to Two Masters and Hangul de Carlo Goldoni, Drifting, after Slawomir Mrozek, You Have All Life Before! after Romain Gary, Good evening, Mr. Wilde! after Oscar Wilde, Shut up, Gary, after the Journal of a journalist without a diary by Ion D. Sirbu and for the national premiere, the play Hoti de Dea Loher, a project by the Craiova National Theater in collaboration with the European Theater Convention. Also, at the Reduta Cultural Center in Brasov, she directed Lear. A bitter and sweet madman, monodrama after Shakespeare, with well-known Braşov actor Mihai Bica, performing at the International Festival of Theatre Studio “DAVILA STUDIO INTERFEST” 2016 in  Piteşti.
The plays HAMLET performed at the “Marin Sorescu” National Theatre in Craiova and Furtuna at the “Gong” Theater in Sibiu received the Trophy of the “Shakespeare” International Festival in Craiova in 2010 and 2016 respectively. The storm participated in the same year at the prestigious Wuzhen Theater Festival from China.
Currently, he is a lecturer at the Department of Arts, the Faculty of Letters, the University of Craiova, and, among other degree shows, he directed and guided, following Shakespeare’s work, the Dream of a Summer Night and All the world’s a stage  – performances that received the Trophy of the International “Shakespeare”Festival, Craiova 2014 and 2012 respectively, in the Theatre Schools section.