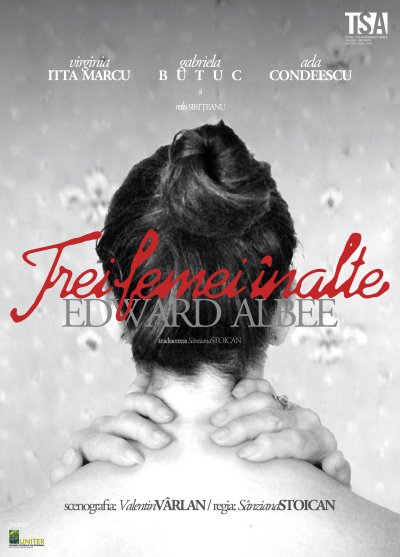 Three tall women is the third piece for which Edward Albee has been awarded the Pulitzer Prize and is part of , together with “Who’s afraid of Virginia Woolf?”, “Goat” or “Who’s Sylvia?”, “Zoo  Story”,the category of scripts that broke the barriers of time and space and made the American playwrighter one of the greatest authors of the late 20th century.
Born in 1928, Albee fits in the pattern of the nonconformist artist. After an agitated childhood and adolescence, scattered with expels from various schools, he breaks up with his adoptive family at the age of 18. He later confessed that he had never felt well with his adoptive parents who, in his opinion, did not know how to be parents, as he probably did not even know how to be a son to them. His homosexual inclinations, as well as his desire to become a writer, were not accepted by the conservative family who had raised him from the age of two weeks.
Albee dedicates himself to writing, becoming a notorious author, played around the world, holding numerous awards, embracing a university career – as a drama professor at the University of Huston.
And if in the early theater plays , the specialised criticism  has detected the influences of absurd theater , later Albee is preoccupied  with the analysis of the human condition in modern society, often an extremely acidic analysis. Also autobiographical elements appear frequently in his work, the most obvious being found in “Three tall Women” and “Who’s Afraid of Virginia Woolf?”.
In Three tall Women, a play written in 1991, Albee turned to details of his own life when he built the protagonist’s relationship with his gay son. The play is a speech about life, about fulfillment and giving up,about love and conflict. A retrospective and introspective look of a woman located in front of the final step having as her resonator her 26-year-old lawyer, and a woman that lived half of her life, her housekeeper – people who in fact embody the ages of their own existence .
Sânziana Stoican is part of the generation of young directors. She graduated in 2009 from the University of Theater (Theater Direction Specialization) of UNATC “I.L. Caragiale “with the performance” The City of Evgheni Griskoveţ “, for which she received the Jury Special Prize at the UNATC Graduates’ Gala, 2009. Two years later, he graduated from the Drama Writing Master at the same University. Her debut on a professional stage takes place in 2011 at the “Toma Caragiu” Theater in Ploiesti, where she builds the Amărăştenii by Zadok Zemach, teaming with the architect Valentin Varlan, with whom he made the scenography of her next performances. Thus, they followed: What beautiful days of Samuel Beckett at the Unteatru Theater in Bucharest (for which she received the Grand Prix at Gala Hop, 2012) and now, at the “Sica Alexandrescu” Theater in Braşov, Three Tall Women by Edward Albee.